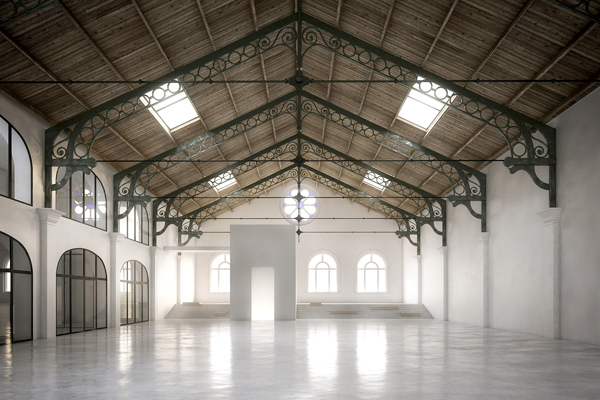 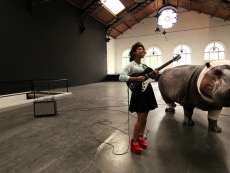 We had nicely settled in the beautiful Valérie Bach gallery of the incredible Ancient Royal Skating dated 1877, when the British young lady (barely 23 years of age) appeared in front of us... H...

La Patinoire royale, or « Royal Skating », as the Belgians used to call it, was built in 1877 in the heart of the Saint- Gilles district. The building was originally used as a roller skating rink, one of the first in Europe !

Before long, these small wheels made way for much larger ones when the building was converted into a Bugatti garage in 1900. Five years later, it became a depot belonging to the national war weapons factory located in Herstal. After the Second World War, the skating rink was used as a garage by Siemens before becoming an exhibition space for collectors’ cars in 1975. The Patinoire royale is a building comprised of two wings; the first of which formally housed the roller skating rink and looks onto rue Veydt, whilst the second is smaller, of more recent construction, and is situated on rue Faider.

The building is characterized by its neo-classical style. Its facade features columns adorned with ionic capitals that line the front of the building facing Veydt Street. Natural light floods into the building through semi-circular arched windows crowned with rosettes. Inside, a vast space unfolds under an impressive metallic Polonceau structure – named after the French engineer who submitted the patent in 1837, and who subsequently became designer of the imperial train for Napoleon III. True to the era, the frame is made of wood and metal; its structure is held together by a metal tie. The rafters are also metallic; resting on consoles of the same style, they are lined with painted wooden frieze discs that mirror the ironwork. The Brussels Region declared the Patinoire royale a historical monument in 1995.