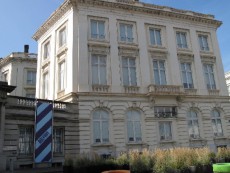 The Bellevue hotel was built on the first plot of land of Place Royale/Koningsplein sold to a private individual in 1776. Philippe de Proft, a wealthy wine merchant and innkeeper was the lucky buyer....

When the multi-instrumentist Lars Iversen meets the singer Mette Lindberg you get a Danish pop hit  The Asteroids Galaxy Tour!

Their first single « the sun ain’t shining no more » was released in 2008 but it’s the title « Around the Bend » that will offer them their current recognition… It’s Steve Job himself who picked this hit for the ad campaign of his baby of the moment: the ’ipod Touch’!

Numerous tours around the globe followed as well as a concert at the Nuits Botanique in 2009 that didn’t go unnoticed… and we were there!

In 2012, the group finally revealed the successor of « Fruit » : « Out of Frequency ».  The next day, during their second stop at the Botanique, we pulled Mette and her 4 boys out of bed to visit the BELvue Museum.  Saxophone, trombone, guitar and Danish vocal cords made the atrium of the BELvue vibrate to the sounds of  « Heart Attack » before playing a second piece in the room dedicated to the  Golden Sixties…