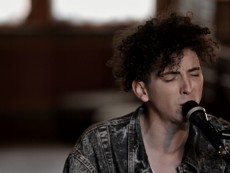 Not far from the Botanique you will find the Autrique house: this is the first mansion built by the 32-year old Victor Horta.  In this Art Nouveau atmosphere Trevor Powers and his guitarist played a ...

In 1893 Horta was 32 years old. Following his internship with Alphonse Balat, the design of several houses in Ghent and several other projects, his friend Eugene Autrique, an engineer at Solvay, asks him to design a house for him.

Autrique’s demands were simple: “not a single luxury, not a single extravagance: an inhabitable basement-floor, a dignified vestibule and staircase hall, the living and dining room nicely connecting, a first floor with bath and toilet (which wasn’t common in those days) and a second floor for children and servants.” The chosen lot was situated on the Chaussée d’Haecht, at number 236 (today it’s n° 266), which was purchased on a public sale by Horta himself. It would be the first manor-house designed by Victor Horta. We can already see elements that form a part of the continual explorations of the architect: the start of an integration with the street, wall-decorations of varying thickness, co-existing symmetrical and asymmetrical shapes, and then there’s his revolutionary usage of metal. At around the same time Horta designs the Tassel Hotel; in the following years he receives a big amount of assignments and the style that will soon become known as Art Nouveau comes into full blossoming. In his memoirs Horta expresses his satisfaction with the house: “he has pleased a friend (…) and delivered an honest achievement” with no input from anybody else. Maison Autrique is an essential place of pilgrimage for everybody who loves architecture and especially for aficionado’s of Horta’s oeuvre.

The Autrique House will be closed to the public from February 2015. The reopening is scheduled for spring 2016.