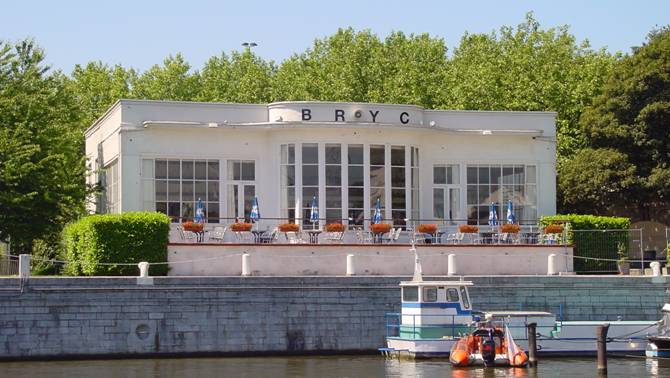 Founded in 1906 and placed under the patronage of King Albert I in 1913, the Brussels Royal Yacht Club has always enjoyed the facilities at the same location it occupies today, downstream of Pont Van Praet at the entrance of the canal from Brussels to the river Rupel, near the royal palace of Laeken.

Originally consisting of a floating shed and a pavilion for use as a clubhouse, it was extended to cater for the growth of its membership, until a fire destroyed the premises in 1934. A new, larger and more modern clubhouse was built and opened in 1936.

This prestigious building still forms the main body of the present clubhouse. Its floor comes from the yacht “Erin” which belonged to Sir Thomas Lipton. Meanwhile, the booths and wall panelling come from the steamships “Princesse Marie-José” and “Prince Leopold.” The BRYC is the main yachting club and the largest marina in French-speaking Belgium.

It is very active and organises many events, on land and at sea!