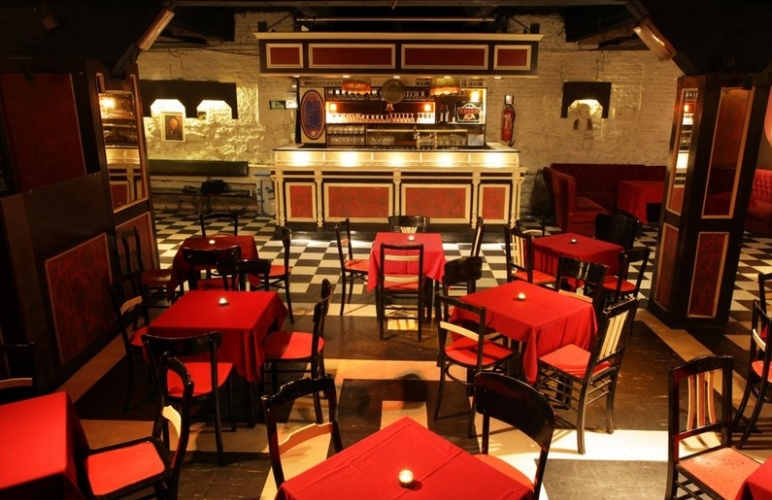 Opened in the Spring of 1960 by a group of enlightened individuals (including Jo Dekmine, future director of the theater 140), l’Os à Moelle is the oldest cabaret in Brussels.

This cellar of undefinable charm, nestled under the birthplace of Jacques Brel, has always had at heart to open its doors to artists from all backgrounds. Singers, actors, comedians, all are likely to have trod the boards of our cabaret! Jacques Brel, Barbara, Toots Thielemans, Arno, Philippe Lafontaine, Pierre Richard, François Pirette, Maurane, Marc Herman, Jacques Higelin (to name only a few!) all have rubbed shoulders with young talent of both the Belgian and international scenes.

Its ‘rive gauche’ (left bank) cabaret look of the early 20th century, gives it authenticity and especially originality. Today, recently started construction works enhance its different spaces without making it lose the soul that is soaked into its walls since its inception.

The group was able to stay the course and maintain the spirit of the oldest cabaret in Brussels.

Over half a century after its opening, l’Os à Moelle offers a series of programs each year that it can be proud of: concerts (rock, jazz, world, French chanson, etc.), plays, improv sessions, comedy clubs or puppet shows, quizzes, parties, festivals …

A wide variety of activities, all of which tend toward the same goal: to offer quality performances full of poetry, audacity, revolt and conviviality to a constantly renewed audience.