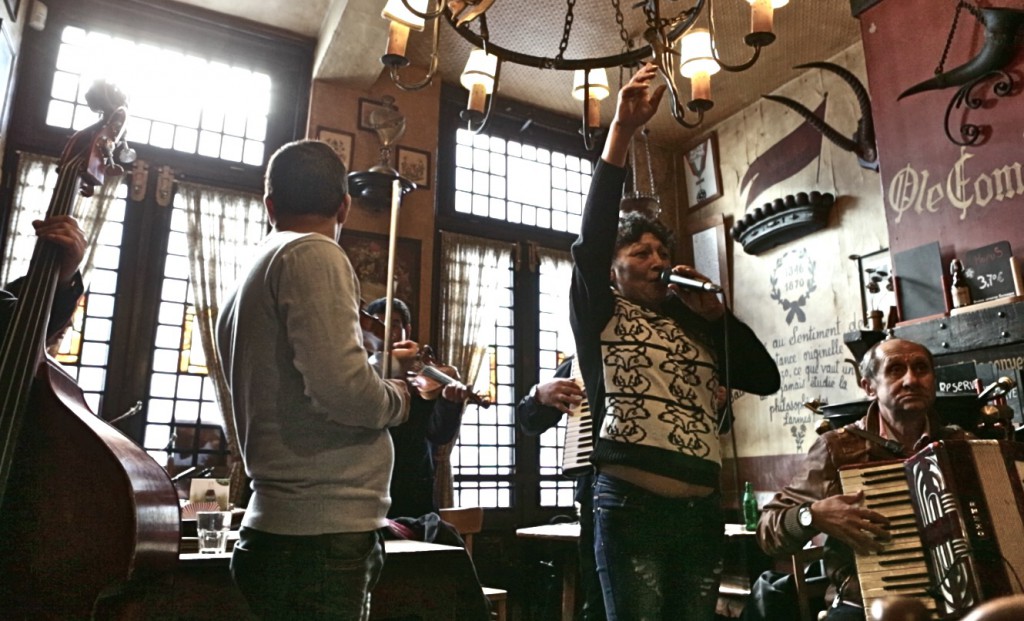 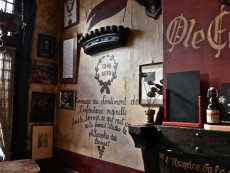 This modest two-row house dates from the 17th century. In 1830, like the neighbouring houses, it was redeveloped by architect H.L.F. Partoes. As indicated by a polychrome commemorative plaque, the Si...

A shooting like no other!  On the occasion of the new album by Taraf de Haïdouks and his 25th anniversary, we suggested the group interpret a title from their last opus in a Brussels ‘estaminet’ ” La Fleur en Papier Doré ».

A mini bus arrived in front of the building and 7 musicians stepped out with their instruments.  We should have filmed the waiters as they saw this neat little gang arrive accompanied by a double bass, accordions, violins among other cymbalom!  Indeed… the charm of the place resides in its narrowness…

Naturally, they settled against the window where they tuned their instruments and ordered a drink…

While it was only the waiters and us in the audience, they gave us a generous and moving performance of « Balalau din Bucuresti » with a song by Viorica Rudareasa who had already participated in their album Dumbala Dumba in 1998.

For those who do not know the history of the Roma band very well, you should know that since the release of his first album in 1991 and his participation in the famous films « Latcho Drom » of Tony Gatlif and “The Man Who Cried” of Sally Potter (featuring Johnny Depp and Christina Ricci), he distinguished himself as the iconic gypsy music band of the Balkans … they still live in the modest village of Clejani, in the heart of the countryside!

Their latest album « Of Lovers, Gamblers & Parachute Skirts » is a pure delight, hurry up to buy it and do not fail to look out for their next visit in the neighborhood!