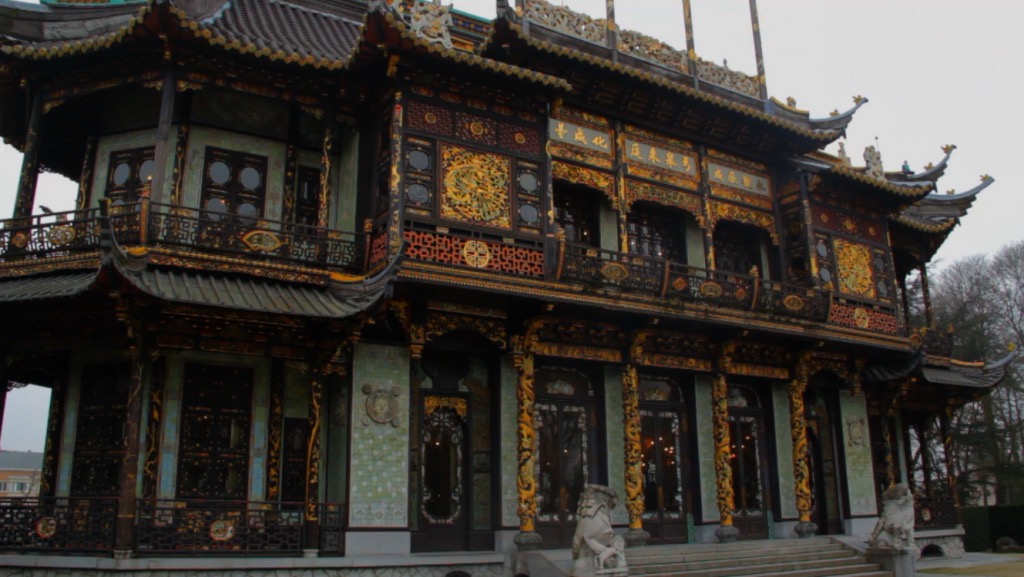 The Chinese Pavilion and the Japanese Tower, built by King Leopold II, raise their strange silhouettes a short distance from the wall surrounding the Royal Palace. They were designed by the Parisian architect Alexandre Marcel, a specialist in Orientalizing architecture.

The Japanese Tower is decorated with wooden elements that were sculpted in Yokohama. The front building manufactured by a Japanese craftsman, was recovered from the Paris World Exposition in 1900. The tower was opened in 1905 but was since 1947 no longer accessible to the public. In the 1980s, the Building authorities began with restoration works during which the woodwork, stained glass windows, the metal ornaments and ceramic decorations were cleaned and restored to their original state. The tower was partially re-opened in 1989. The outside of the decoration consists of 44 metal elements and 32 wooden sculptures, some of which still await restoration. The works were completed in 2008 but the preparation for the restoration of the interior is still ongoing.

The Chinese Pavilion, which opened in 1910, exemplifies the way exotic architecture was viewed from a European perspective. Although many of the outdoor sculptures were made in Shanghai, it clearly bears the stamp of the Western building tradition. The Chinese Pavilion was meticulously restored between 1991 and 1995. After a thorough stratigraphic study (1,800 measurements), the woodwork and the many wood carvings were cleaned and then covered with colorless resin, three layers of varnish and in some places a layer of gilt. The damaged roof tiles and ceramic elements were repaired and the metal ornaments were re-plated. The interior has regained all its splendor after the restoration of the murals painted on plaster, the mounted fabric, the wallpaper, the varnished wooden sculptures, the lamps as well as the bronze and brass elements. The woodworm which was discovered during the restoration, was carefully removed. The annex of the Chinese Pavilion, known as the Coach House, was restored between 1998 and 1999. The tiles in baked clay were cleaned and restored and  identically placed on a completely new truss. The masonry and woodwork were treated against woodworm. The interior was completely rebuilt between 2001 and 2003. The permanent exhibition furniture was installed in late 2005 and early 2006. The Museum of Japanese Art opened its doors in March 2006. It shows a selection of 12,000 artifacts from the Royal Museums of Art and History, one of the most important collections in the world.