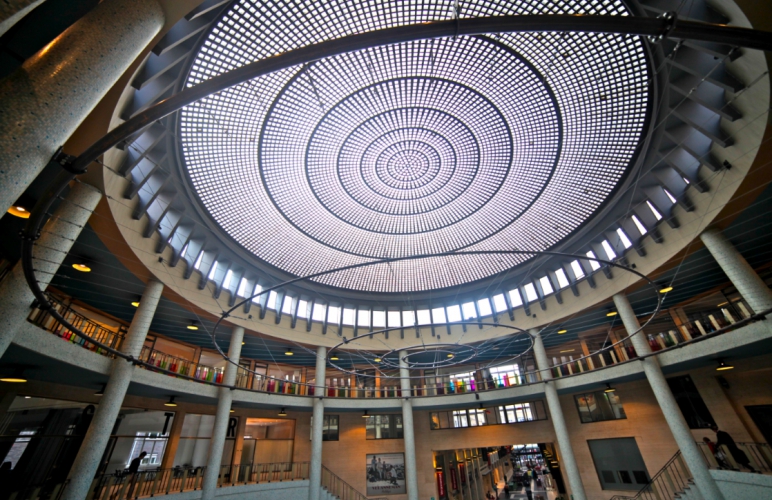 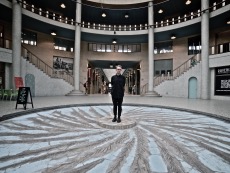 There are times when we let ourselves float in spite of ourselves ... Momentswhen whatever is happening around us no longer matters… Yet we were in the noisy Galerie Ravenstein,  children...

An important pedestrian link between the ville haute and ville basse (uptown and downtown Brussels), the Galerie Ravenstein leads to Gare Centrale. It is incorporated in a huge office building, four storeys high.

Its original aim was to give a new boost to the neighbourhood, which was heavily affected by the destructive works for the Nord-Midi (north-south) junction. Designed as a shopping gallery which could house 81 shops, it was built between 1954 and 1958 in the International style, according to plans by the architects Alexis and Philippe Dumont, who designed the nearby building which houses Shell’s offices. From rue Ravenstein, a huge porch gives access to a staircase under a cupola which compensates for the ten-metre height difference that exists between the two streets. The gallery seems to prolong the tradition of the large covered arcades which are so characteristic of the 19th century. Just like them, it was given a zenithal lighting feature which takes the form of a concrete and brick surbased vault in the gallery itself and in the atrium, of an impressive concrete cupola inlayed with over one hundred glass bricks set in concentric circles. Many Brussels residents and commuters continue to use this gallery which still houses shops, restaurants and cafés.