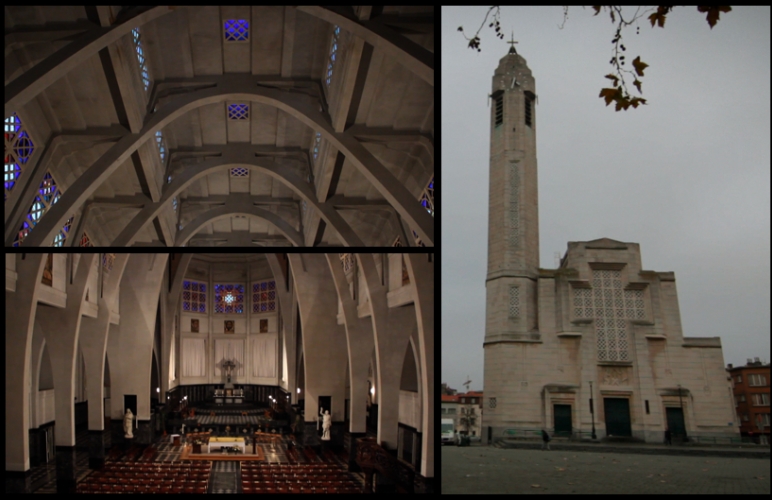 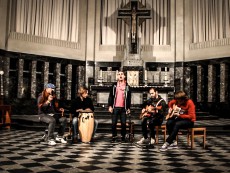 One night in Molenbeek. The impressive concrete « Saint-Jean-Baptiste » church opens in front of us. We're there with Fool’s Gold,  five Americans from Los Angeles who just issued their al...

Brussels has three concrete churches and St. John the Baptist Church is one of them.

Construction began in 1931 and lasted barely fifteen months. Joseph Diongre, architect who drew the plans, retained the traditional floor plan in the shape of a Latin cross, but gave the up to 56 meter high bell tower a place in the façade. The outer walls of the façade are made of white Brauvilliers stone while the interior makes abundant use of different kinds of Belgian marble. Parabolic arches, inspired by the concrete structures of the aircraft hangars at Orly, give a wide and subtle elegance to the nave, beautifully lit by a unique set of multicolored stained glass windows. These are contained in 604 prefabricated screen walls that divide the walls between the elongated arches in reinforced concrete. Moisture infiltrations had caused corrosion of the metal reinforcements, but, fortunately, the screen walls could be restored by a process of strengthening and micro injection of grout into the cracks and the horizontal joints. The stained glass windows, which were assembled without putty and have a plate in hammered glass, were maintained thanks to a continuous flow of air which prevented condensation.