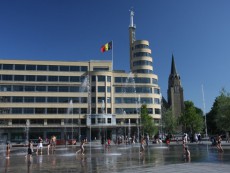 Formerly known as Place Sainte-Croix, the square was renamed in 1937 after Eugene Flagey, Mayor of Ixelles between 1936 and 1956. In the 1930s, a number of buildings of the same size were erected, wit...

We had been watching the French duo Eléphant for months.  It was Lisa, half of the band, however, who contacted us a few days prior to their Brussels’ concert playing the first part of Julien Doré’s concert.  Both sides clearly wanted this: doing something together, something unique and off the beaten track.

And they were not sorry!  We took them to the rooftop of the Flagey ship, in wind and rain… So they forgot about the wind in their hair, the rain on the instruments, as well as vertigo… and they played “Collective mon amour” from their first album under the same name.